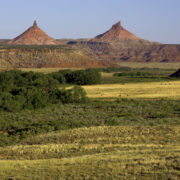 President Trump has signed an executive order to review National Monuments to determine which should be eliminated or decreased in size. The public must be heard during this process. West Virginians, like all Americans, own these lands, and deserve to have their say on our outdoor recreation lands.

About 2 dozen monuments are subject to the review, but the order allows wide discretion that puts monuments of all size at risk. The sweeping review will include all monuments created since 1996 that are over 100,000 acres, or where the Secretary determines the designation was made with insufficient input. In short, the executive order could undermine one of the nation’s most important conservation tools. The Bears Ears National Monument in Utah, pictured above, is one of the monuments at risk.

We are asking you to take two actions:
1. Call the Department of Interior comment line at 202-208-7351. Press zero to get a recording. Say you are calling from West Virginia (or your state) and want the public to be involved in the national monuments review process. The public must be heard.

2. After the call, click here to tell us how you would like to help West Virginians for Public Lands defend our national forests, refuges, and park units.

We will need your help in the coming months! 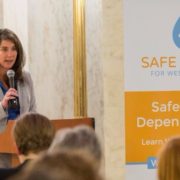 Angie’s colleagues applaud and celebrate her selection as a River Hero. Paul Daizell of WV Environmental Council credits Angie for inspiring him to work for clean air and water. “I would not be doing the work I do without Angie’s leadership, passion, knowledge, and clear focus on protecting the rivers,” he said. “She truly is a River Hero.”

Hilary Harp Falk, a regional executive director for National Wildlife Federation, of which WV Rivers serves as the state affiliate, said, “Being a woman conservation leader is not easy. But in four short years Angie has become a leader for rivers in the state and across the country.”

Angie credits WV Rivers staff and volunteers for the award, and for the growing awareness of the need for safe water. “Angie brings a unique leadership style and inclusive attitude that proves very effective in building a strong coalition of supporters,” said Autumn Crowe, WV Rivers program director.

WV Rivers outreach manager Kathleen Tyner said she appreciates Angie’s inclusive approach: “Angie’s ability to bring folks from different paths and viewpoints together, for the betterment of our rivers and streams, is an inspiration to all who work with her.”

FOR IMMEDIATE RELEASE: April 26, 2017
CONTACT: Kathleen Tyner, (304) 637-7201, KTyner@WVRivers.org
WV Rivers Coalition’s Angie Rosser Named River Hero
Award from River Network cites Rosser’s work at making clean water a non-partisan issue
Charleston, WV — The River Network, a Colorado-based national nonprofit organization that supports local and statewide organizations involved in restoring and protecting rivers and streams, has named WV Rivers Coalition’s executive director Angie Rosser as one of its 2017 River Heroes. The River Heroes Award was created in 2001 to recognize and celebrate people whose efforts to protect and restore their local waters have been extraordinary in scope, scale, impact and heart.
River Network cited Rosser’s work as a steady voice and unifier across political lines, tapping into the values everyone in West Virginia shares: “As the statewide voice for water-based recreation and clean rivers and streams in West Virginia, WV Rivers unites diverse coalitions who understand the connection between our public recreation lands and the waters on which we all rely.”
Rosser joined West Virginia Rivers Coalition (WV Rivers) as the executive director in 2012, after serving on the board of directors, with a background working in West Virginia on social justice issues in the nonprofit sector. She is known as someone who brings both a professional commitment to clean water for the common good, as well as a personal desire to protect the waters of the Elk River that flow through her backyard.
Rosser’s colleagues applauded her selection as a River Hero. Evan Hansen, president of Downstream Strategies in Morgantown, said, “During the 2014 water crisis, Angie was the critical public figure who turned the community’s rage into action.”
Paul Dalzell of WV Environmental Council credits Rosser for inspiring him to work for clean air and water. “I would not be doing the work I do without Angie’s leadership, passion, knowledge, and clear focus on protecting the rivers,” he said. “She truly is a River Hero.”
WV Rivers is the state affiliate of the National Wildlife Federation. Hilary Harp Falk, a regional executive director for NWF, said, “Being a woman conservation leader is not easy. But in four short years Angie has become a leader for rivers in the state and across the country.”
Rosser credits WV Rivers staff and volunteers for the award, and for the growing awareness of the need for safe water. “She brings a unique leadership style and inclusive attitude that proves very effective in building a strong coalition of supporters,” said Autumn Crowe, WV Rivers program director.
WV Rivers outreach manager Kathleen Tyner said she appreciates Rosser’s inclusive approach: “Angie’s ability to bring folks from different paths and viewpoints together, for the betterment of our rivers and streams, is an inspiration to all who work with her.”
https://wvrivers.org/wp-content/uploads/2017/04/WV-Rivers-letterhead-header-1-e1493233823677.png 65 300 Kathleen Tyner https://wvrivers.org/wp-content/uploads/2017/02/logo-1.png Kathleen Tyner2017-04-26 15:04:422017-04-26 15:29:25For Release: Angie Rosser of WV Rivers Coalition Named National River Hero 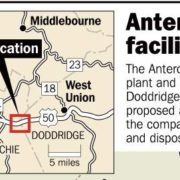 You have the opportunity to submit comments on the Antero landfill National Pollutant Discharge Elimination System (NPDES) Permit. This is an important permit that regulates stormwater discharges from the Antero landfill which will dispose of the salt generated at the Antero water treatment facility.

The WVDEP will be holding a public hearing on Antero’s NPDES permit on Monday, May 1, 2017.

The proposed Antero landfill and wastewater treatment facility encompasses approximately 486 acres located in Doddridge and Ritchie Countie. As proposed, facility would treat fracking wastewater for re-use and dispose of the salt byproducts in the attached landfill. The project would impact 89 streams and 11 wetlands and is located within Hughes River Water Board’s drinking water protection area.

You can view the Antero NPDES Permit by visiting this link, type “WV0117579” in the box titled “Permit Number” and click “go.”

To learn more about the Antero NPDES Permit or how to submit comments, view our fact sheet. Comments are due May 11, 2017.

The West Virginia Department of Environmental Protection (WVDEP) Division of Water and Waste Management (DWWM) is accepting comments on Antero Landfill National Pollutant Discharge Elimination System (NPDES) Permit. The NPDES permit covers stormwater discharges from the Antero Landfill facility which will be used to dispose of the salt generated at the adjacent Clearwater water treatment facility. You can submit comments on the permit to WVDEP through May 11, 2017. If you have questions, please contact Autumn Crowe, acrowe@wvrivers.org.

SUBMIT COMMENTS TO WVDEP BY 5PM ON MAY 11th 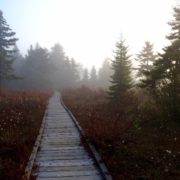 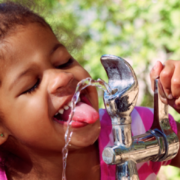 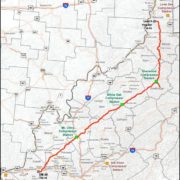 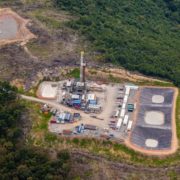 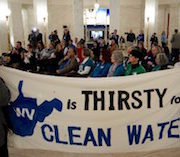 As WV’s regular legislative session enters its final hours, the dust is beginning to settle and one thing is clear: polluters want to cover the truth and silence your concerns. A third bill that weakens water protections this session, SB 687 – the “coal bill”, is expected to pass. You did your part. You sent a total of 12,350 letters supporting clean water. We saw 51 people speak out for water during public hearings. We did our part. We provided 8 fact sheets and bill analysis to the public and legislators. We were included in more than 30 news stories and interviews. But ultimately more legislators chose narrow industry interests over the public interests.

Yesterday, we joined together with other groups to call our Legislature and Governor out for turning a deaf ear to science and citizen concerns. But just hours later, the House rejected an amendment to SB 687 which would have protected water. We’d like to thank Delegates Fleischauer, Lynch, Pushkin, White, Hornbuckle, Miley, Pyles, Isner, Moore, and Rowe for listening to West Virginians and voting for water. View press coverage here, here and here.

Explore the Mononghela National Forest May 20-21 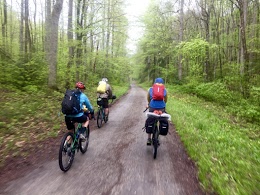 Join WV Rivers in the heart of the Mononghela National Forest during our Best of Birthplace of Rivers Weekend, May 20-21!

The weekend kicks off on Saturday, May 20, at our basecamp for the weekend, the Elk River Inn in beautiful Slatyfork, WV.

After check-in we’ll have interactive programs for folks of all ages. Learn about the natural wonder and beauty of West Virginia’s forests and rivers. Then join a Leave No Trace Master Educator for a training on how to leave only footprints when exploring the great outdoors. We’ll have an early BBQ dinner, then once the stars come out we’ll gather around a campfire.

field trips into the Monongahela National Forest. You’ll have the option to choose one of four excursions:

Space is limited, so make sure you register for the Best of Birthplace of Rivers Weekend soon!
Adult registration is $20/adult and youth registration is $5/child under 15 years old. Registration includes Saturday dinner, Sunday lunch, and all programming. Saturday lodging and Sunday breakfast are not provided. Learn more.

Register for the Best of Birthplace of Rivers Weekend here. We’ll follow-up after you register with more information.

West Virginians Go To The Hill For Clean Water

A team of a dozen clean water advocates representing six West Virginia counties joined us on Capitol Hill on April 5 to meet with Congressional members and staffs to share stories on how federal funding has benefited watershed protection and restoration in the Mountain State. Chesapeake Bay Day on the Hill is organized annually by the Choose Clean Water Coalition, a network of more than 200 organizations from Bay states for which WV Rivers serves as WV’s state coordinator. 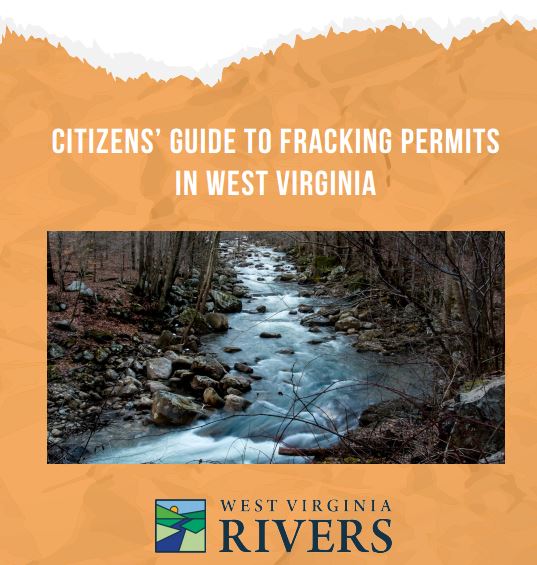 Are you confused by the complicated permitting process required for shale gas development and it’s related infrastructure? That’s why we’ve created the Citizen’s Guide to Fracking Permits in West Virginia.

We’ll be holding a free webinar on the Citizen’s Guide on April 12 with our partner, Downstream Strategies. Learn about the Guide and how it can help you submit meaningful comments to the WVDEP. Register for the webinar here.