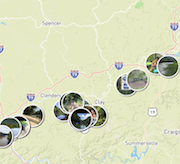 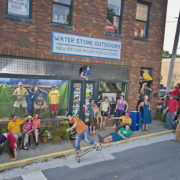 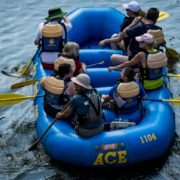 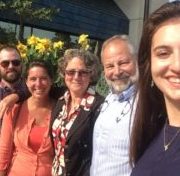 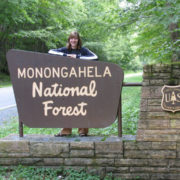 How Public Lands Shape My Memories

By Kathleen Tyner
It wasn’t until recently that I realized how important public lands were in shaping my life. I moved to West Virginia from western Pennsylvania in November 2009, when I was just 24 years old, to start my job with West Virginia Rivers Coalition. The very first weekend after I made the move I took a trip to Seneca Rocks to hike and bird watch. Driving through the mountains I was bitten by the bug; I knew I was home. It was a feeling I had never experienced before, but I suspect many folks that have moved to West Virginia from out of state have felt a similar sense of home and belonging.

Wanting to explore all West Virginia had to offer, I created a profile on a popular online dating site looking for someone to show me around the state. That’s how I met my husband, Dustin, on a cold and wet late March day in the Cranberry Wilderness. I knew I had met my match when his idea of a good first date involved traipsing down national forest roads looking for the first signs of spring.

From there it was a romance built on exploring public lands. Each weekend we went to a new state park, camped in the Monongahela National Forest, or hiked a new trail in one of the national river park systems. I had the ideal tour guide in Dustin. When most kids graduate high school, their idea of a senior trip usually involves beaches and city life. Not Dustin. Along with a friend, he went on a summer-long road trip visiting all 36 of West Virginia’s state parks.

In September 2015 public lands played another important role in my life. On one of those late, hot afternoons that only happen when summer is waning, Dustin and I went on an after-work hike of the Endless Wall Trail, part of the New River Gorge National Scenic River trail system. At one of the overlooks we were engaged.

We got married in August 2016, and spent our honeymoon at a national park, the Cape Hatteras National Seashore. At the time I’m writing this, we’re preparing to go to Cape Hatteras to celebrate our first anniversary.

Not all of my milestones on public lands are quite as dramatic as meeting my husband, but they shape my memories. I caught my first trout on a flyline on Glade Creek, part of the New River Gorge National River; I broke my hand kayaking on the New Rive; I dug my first ramps on a steep hillside in the Monongahela National Forest; I saw my first ruffed grouse when picking blackberries in the Gauley River National Recreation Area; and just this summer I saw 11 native orchid species in the Southern Monongahela National Forest.

When I hear about attempts to transfer public lands to private holdings it makes me ill. These lands belong to all of us. Public lands have shaped who I am, my values; and set my life on a course that I couldn’t be more thankful for.
Today, I challenge you to take a moment and think about all the times public lands played an important role in your life. Vacations, family camping trips, and retreats from every day stress. I’d be willing to bet public lands have been pretty darned important.

Headwater Streams and Wetlands Across the USA at Risk for More Pollution – Frack Check, 8/2/2017 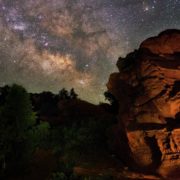 The Center for Biological Diversity announced today it has filed a lawsuit against Interior Secretary Ryan Zinke, asserting the Trump administration is “unlawfully withholding public records” in its ongoing review of dozens of national monuments.

In a lawsuit filed in the U.S. District Court for the District of Columbia, the environmental group said that Interior has failed to respond to requests under the Freedom of Information Act.
“The Interior Department’s refusal to release the communication records and schedules of its secretary, and its failure to provide Interior Department records generated in connection with its review of national monument designations, undermines FOIA’s policy of government transparency,” the lawsuit says.

CBD is seeking information in relation to Interior’s review of 27 national monuments. President Trump ordered the review in late April, mandating that Zinke assess the boundaries of all monuments created since 1996 that encompass more than 100,000 acres.

An Interior spokeswoman referred requests for comment on the lawsuit to the Justice Department, which declined to comment.

Although Zinke’s daily schedules are available online from Interior, the documents do not necessarily offer details about the secretary’s meetings.
Dates for his visit to the Bears Ears and Grand Staircase-Escalante monuments in Utah in May, for example, indicate only that the secretary would visit the sites and did not detail his meetings with local officials or other stakeholders. 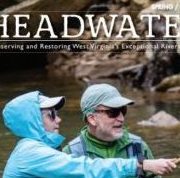 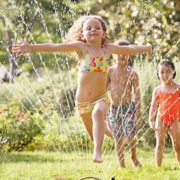