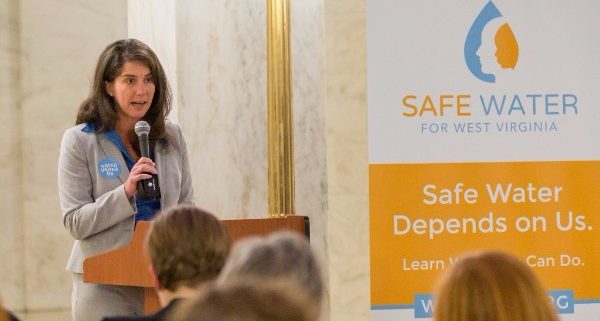 Angie’s colleagues applaud and celebrate her selection as a River Hero. Paul Daizell of WV Environmental Council credits Angie for inspiring him to work for clean air and water. “I would not be doing the work I do without Angie’s leadership, passion, knowledge, and clear focus on protecting the rivers,” he said. “She truly is a River Hero.”

Hilary Harp Falk, a regional executive director for National Wildlife Federation, of which WV Rivers serves as the state affiliate, said, “Being a woman conservation leader is not easy. But in four short years Angie has become a leader for rivers in the state and across the country.”

Angie credits WV Rivers staff and volunteers for the award, and for the growing awareness of the need for safe water. “Angie brings a unique leadership style and inclusive attitude that proves very effective in building a strong coalition of supporters,” said Autumn Crowe, WV Rivers program director.

WV Rivers outreach manager Kathleen Tyner said she appreciates Angie’s inclusive approach: “Angie’s ability to bring folks from different paths and viewpoints together, for the betterment of our rivers and streams, is an inspiration to all who work with her.”