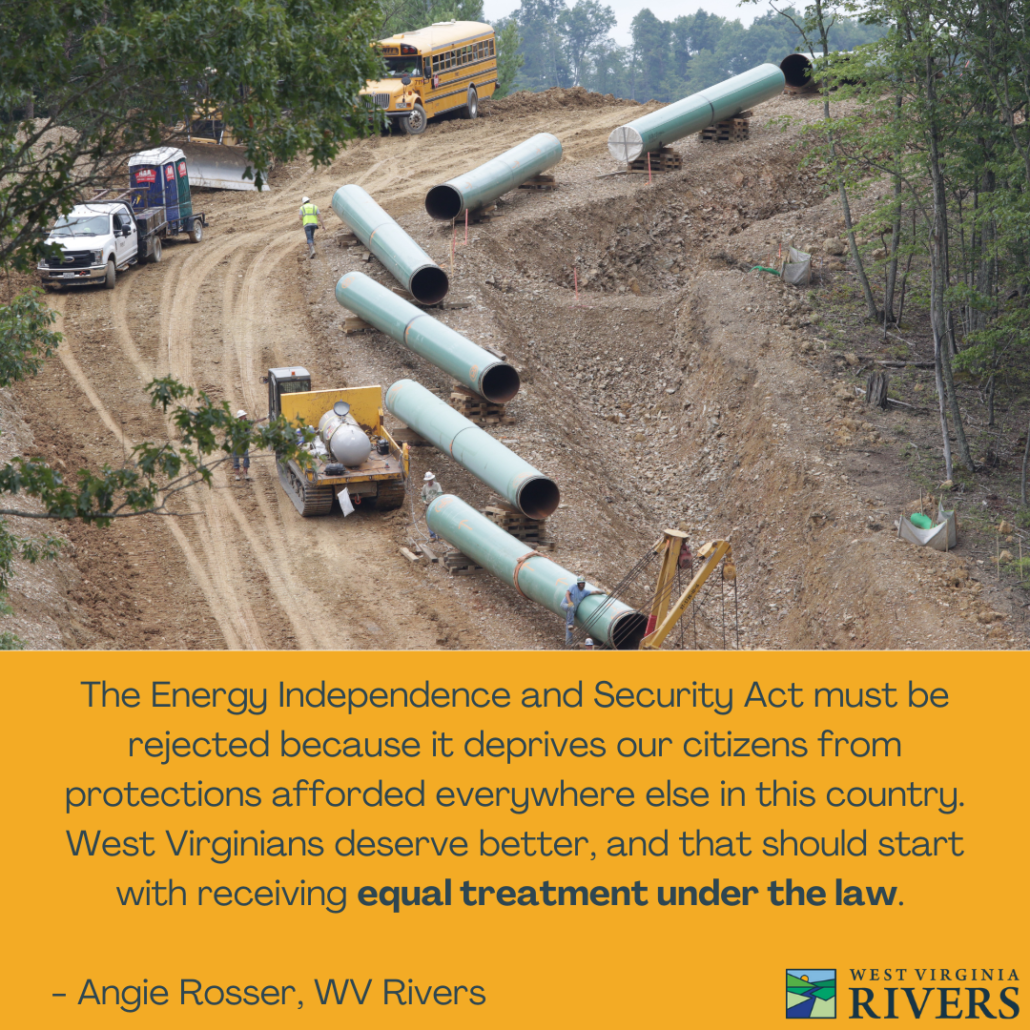 West Virginia is once again at the center of debate in Congress. Yesterday, legislation was released that changes how energy projects are handled by federal agencies and requires the immediate approval of construction of the Mountain Valley Pipeline with no judicial review as part of a spending bill that Congress must pass by September 30, or the federal government will shut down.

The Energy Independence and Security Act of 2022, summarized here, would change the review process of massive energy projects like pipelines and mines. Our initial review of the bill text finds that these changes would limit how organizations like WV Rivers, and citizens like you, make sure environmental impacts of such projects are minimized. Read WV Rivers Statement on the Act.

However, it’s the final section of the Act that is the most alarming through its required authorization of the Mountain Valley Pipeline. Starting on page 86 it reads:

PURPOSE. —The purpose of this section is to require the appropriate Federal officers and agencies to take all necessary actions to permit the timely completion of the construction and operation of the Mountain Valley Pipeline without further administrative or judicial delay or impediment.

No project should be exempt from thorough science-based analysis, public input, and judicial review under cornerstone laws like the Clean Water Act and the Endangered Species Act, which the MVP has a long history of violating.

We’re calling on Congressional leadership to put a stop to this reckless and unfair legislation. Send a message to Congress NOW! Let them know that fast-tracking the Mountain Valley Pipeline would deprive West Virginians of the right to fair and equal treatment under federal law.

PFAS are manmade chemicals that do not breakdown in the environment, and they accumulate in our bodies. The West Virginia report finds that these toxins are present in the drinking water supplies of 67 public water systems in the state.

The WV study comes on the heels of new health advisories from the U.S. Environmental Protection Agency (EPA) on four types of PFAS. Policies preventing PFAS from entering our water systems and ensuring communities already dealing with contamination get the resources they need will be priorities on both the state and federal level. Be an advocate! Sign-up for our PFAS action alert list. 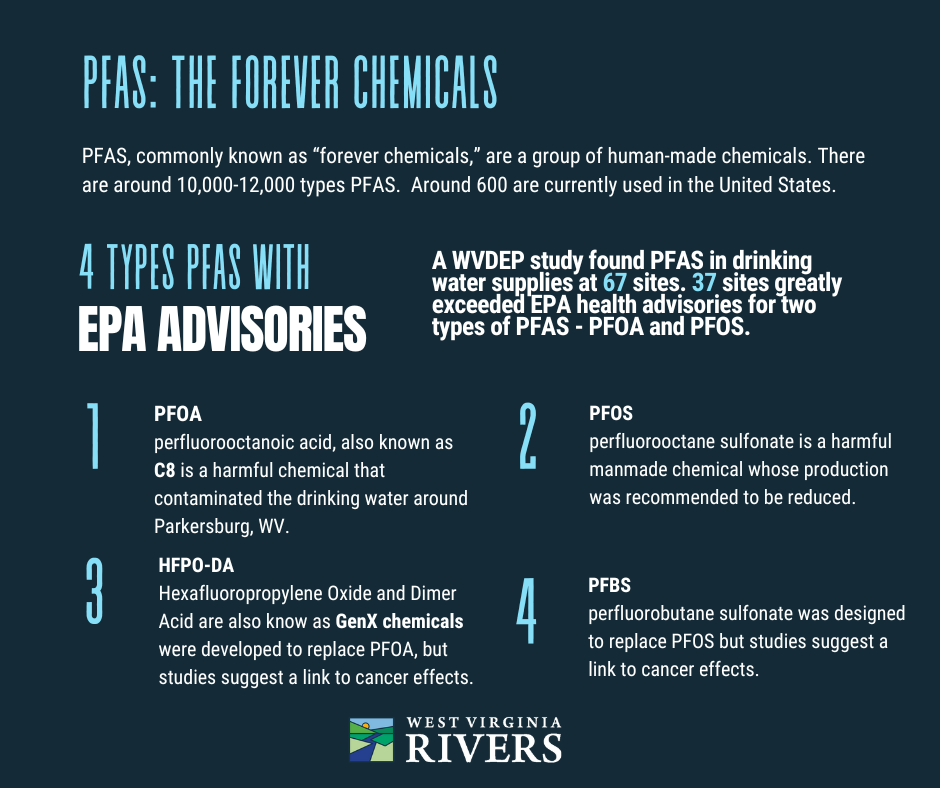 One of the items discussed during the September legislative interim session was off-road vehicles on state public lands. During a meeting of the Parks, Recreation and Natural Resources Subcommittee legislators debated the pros and cons of off-roading. The majority of discussion focused on the cons through the testimony of retired State Parks administrators.

WV Rivers opposes off-road vehicles in state parks, forests and wildlife management areas. Off-road vehicles cause erosion and damage to the surrounding woods and streams. They displace and interrupt other activities like hiking, biking, hunting and fishing. There are appropriate places for off-road vehicles; and those places are not our state public lands! 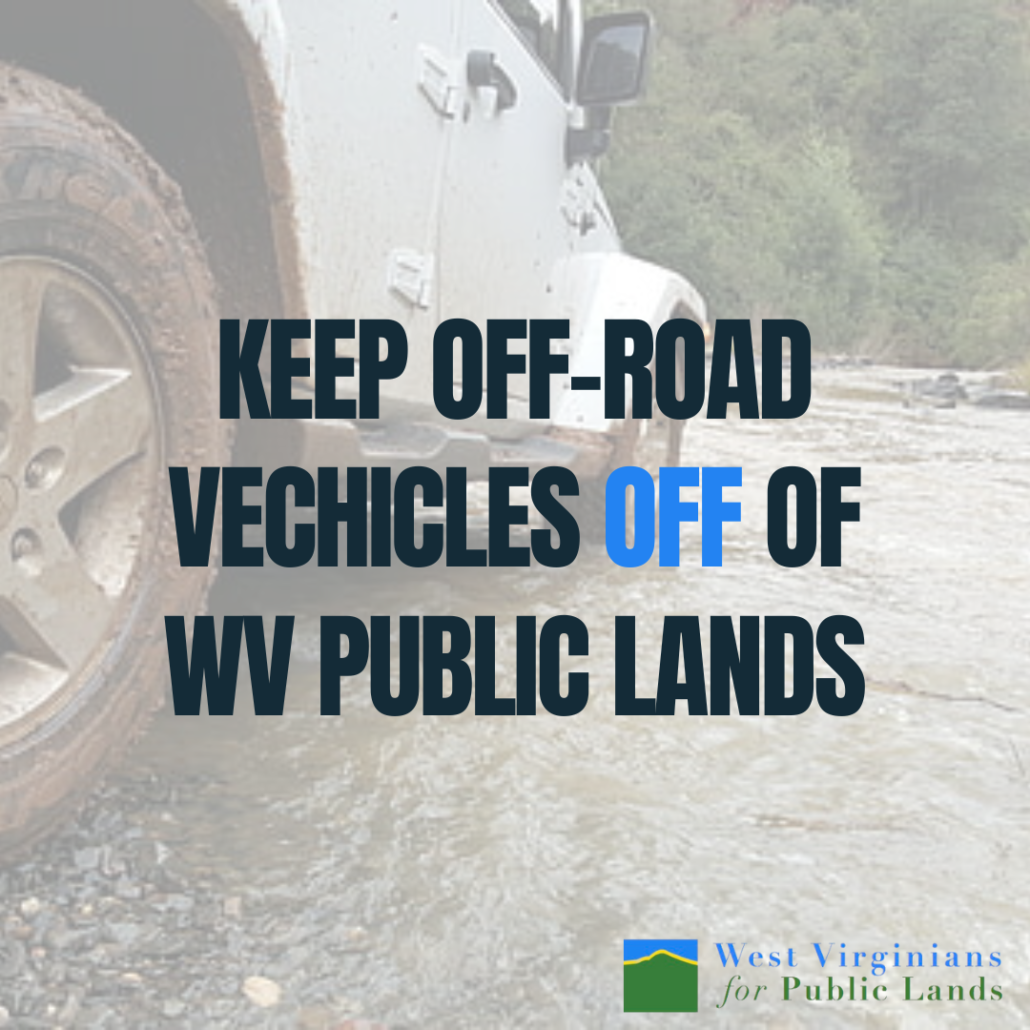 While there was bipartisan opposition to off-roading, we expect to see legislation introduced during the 2023 legislative session to allow off-road vehicles on state lands. Concerned about off-roading? Get in touch with our public lands coordinator, Mike Jones. 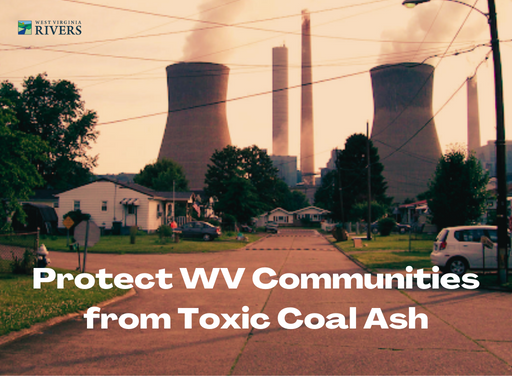 Demand the Mountaineer Power Plant clean up its coal ash! Comment by September 26.

Coal ash is the toxic by product of coal-fired power plants. It is harmful to human and environmental health. Coal ash must be disposed of in a way that prevents it from contaminating our water resources. Learn more.

The Mountaineer Power Plant in Letart, WV is owned by American Electric Power (AEP). This power plant uses two disposal sites for coal ash – a 660-acre landfill and a 28-acre pond. Monitoring finds that the facility is contaminating groundwater.

The EPA is considering a request from AEP to extend the deadline for closing its unlined coal ash pond.

The EPA issued a draft decision that found AEP is violating several requirements for coal ash disposal at both the coal ash pond and the landfill. EPA has proposed to grant AEP’s requested extension – if AEP corrects all of the violations.

The WV Climate Alliance, which WV Rivers coordinates, is holding a series of nonpartisan candidate forums around the state. The first forum was held in mid-September and included candidates running for legislative office in the Huntington area. You can view a recording here.

Additional forums will be held in Morgantown on September 29 and Charleston, TBD. 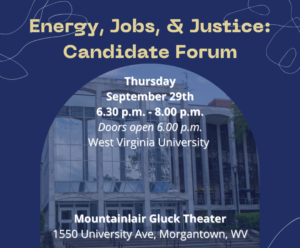 During the forums citizens have the opportunity to hear candidates discuss the future of West Virginia around the theme of energy, jobs, and justice. Candidates will also answer written questions from the public.

New Way to Donate to WV Rivers for Federal Employees

Did you know WV Rivers is now an official charity of the Combined Federal Campaign (CFC)? If you’re a federal employee, you can participate in workplace giving through the CFC by designating WV Rivers Coalition #60806.

Opportunities to Learn, Connect, and Get Inspired

Join Friends of the Cheat at the historic Metropolitan Theater in Morgantown, WV, for a free public screening of ‘The Friends of the Cheat Story’, a new documentary directed by Robert Tinnell. Doors open at 5:30pm – showtime is 6:00pm to 7:00pm, with a Q&A session following.

The Friends of the Cheat Story will be screened as a double-feature with an earlier FOC documentary, ‘Catalyst of Change’, produced and directed by Dale Rongaus and Dan Henninger. Shown together, these two films tell the story of the successful restoration of the Cheat River, once one of the most endangered watersheds in the nation.

Attendees are invited to join FOC staff at the Apothecary Ale House and Cafe for the event after party.

Webinar/In-Person Presentation: 2022 and the Climate Crisis — What Just Happened, and What’s Ahead? – October 3

Join Ohio River Coordinator, Heather Sprouse for a serene 1.1 mile hike along the Coonskin Branch stream on the Alice Knight Memorial Trail. This moderately difficult trail and much of the heart of Coonskin Park is proposed to be radically modified for a plan to expand Yeager Airport.

Come enjoy one of Charleston’s premier green spaces and voice your ideas, concerns and suggestions about this proposed project! Learn more and RSVP.

Stop by and chat with WV Rivers staff during Huntington Pride on October 22! We’ll have stickers and other goodies – hope to see you there!

WV Rivers Statement on the Energy Independence and Security Act