The thousands of pages of email correspondence chart how Interior Secretary Ryan Zinke and his aides instead tailored their survey of protected sites to emphasize the value of logging, ranching and energy development that would be unlocked if they were not designated as national monuments. 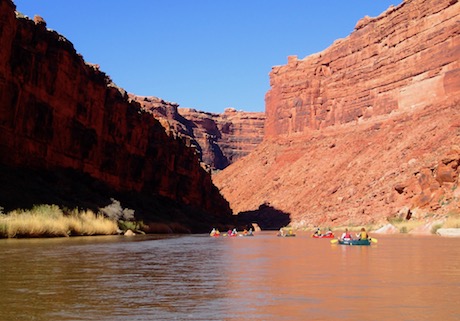 Comments the department’s Freedom of Information Act officers made in the documents show they sought to keep some of the references out of public view because they were “revealing [the] strategy” behind the review.

Presidents can establish national monuments in federal land or waters if they determine cultural, historical or natural resources are imperiled. In April, President Trump signed an executive order instructing Zinke to review 27 national monuments established over a period of 21 years, arguing his predecessors had overstepped their authority in placing these large sites off-limits to development.

Trump has already massively reduced two of Utah’s largest national monuments, Bears Ears and Grand Staircase-Escalante, and has not ruled out altering others.

The new documents show that as Zinke conducted his four-month review, Interior officials rejected material that would justify keeping protections in place and sought out evidence that could buttress the case for unraveling them.

Newspaper Rock is a petroglyph panel etched in sandstone that records approximately 2,000 years of early human activity in the Bears Ears region.

On July 3, 2017, Bureau of Land Management official Nikki Moore wrote colleagues about five draft economic reports on sites under scrutiny, noting there is a paragraph within each on “our ability to estimate the value of energy and/or minerals forgone as a result of the designations.” That reference was redacted on the grounds it could “reveal strategy about the [national monument] review process.”

Officials also singled out BLM acting deputy director John Ruhs’s July 28 response to questions from Katherine MacGregor, acting assistant secretary of lands and minerals management, as eligible to be redacted. MacGregor had asked about the logging potential of Cascade-Siskiyou National Monument if Trump reversed the expansion former president Barack Obama carried out at the end of his second term.

“Previous timber sale planning and development in the [expansion area] can be immediately resumed,” Ruhs wrote.

Zinke proposed removing some of the forested areas within Cascade-Siskiyou, where three mountain ranges and several distinct ecosystems intersect, to “allow sustained-yield timber production.” Trump has yet to alter the site, which was established by former president Bill Clinton as a 65,000-acre monument and then enlarged by nearly 48,000 acres days before Obama left office.

These redactions came to light because Interior’s FOIA office sent out a batch of documents to journalists and advocacy groups on July 16 it later removed online.

“It appears that we inadvertently posted an incorrect version of the files for the most recent National Monuments production,” officials wrote July 17. “We are requesting that if you downloaded the files already to please delete those versions.”

Aaron Weiss, a spokesman for the advocacy group Center for Western Priorities, said in an email the “botched document dump reveals what we’ve suspected all along: Secretary Zinke ignored clear warnings from his own staff that shrinking national monuments would put sacred archaeological and cultural sites at risk.”

“Trying to hide those warnings from the public months later is disgraceful and possibly illegal,” Weiss added.

Asked for comment, Interior Department officials said they were looking into the matter.

The inadvertently released documents show department officials dismissed some evidence that contradicted the administration’s push to revise national monument designations, which are made under the 1906 American Antiquities Act. Estimates of increased tourism revenue, analyses that existing restrictions had not hurt fishing operators and agency reports that less vandalism occurred as a result of monument designations were all set aside.

On Sept. 11, 2017, Randal Bowman, the lead staffer for the review, suggested deleting language that most fishing vessels near the Northeast Canyons and Seamounts Marine National Monument “generated 5% or less of their annual landings from within the monument” because it “undercuts the case for the ban being harmful.”

Robert B. Vanasse, who represents groups that have lobbied to allow commercial fishing in national marine monuments in the Atlantic and Pacific Ocean, said Trump administration officials have been more open to outside input than their predecessors.

“They had a lot of meetings with our folks but didn’t listen,” he said of Obama officials, adding even some Massachusetts Democratic lawmakers raised concerns about the New England marine monument’s fishing restrictions.

Department officials also redacted the BLM’s assessment that “it is unlikely” that the Obama administration’s establishment of the 1.3 million-acre Bears Ears National Monument “has impacted timber production” because those activities were permitted to continue.

In response to questions about Grand Staircase-Escalante, BLM wrote that “less inventory” of cultural sites would have occurred without the 1996 monument designation, noting more than twice as many sites are now identified each year than before. “More vandalism would have occurred without Monument designation,” it states, noting four visitors centers were established to help protect the area.

P. David Polly, the president of the Society of Vertebrate Paleontology and a professor of sedimentary geology at Indiana University, said in an interview “there’s specific funding that comes” with a monument designation, which BLM itself identified in its submission as one of the reasons behind the “increase” in archaeological finds.

Polly added the funding also accounts for why the number of paleontological finds in Grand Staircase-Escalante has risen from a few hundred before 1996 to “several thousand.”

“This funding will disappear for the areas that are no longer in the monument,” he said.

Agencies typically incorporate material submitted through public comments into their regulatory proposals, but documents released under the FOIA earlier this year show Bowman told colleagues in a May 2017 webcast “barring a surprise, there is no new information that’s going to be submitted” through the public comment process on the monuments review.

Polly said the new documents show how Interior officials disregarded the material they gathered during the comment period. “They knew all of these things and went ahead and cut them anyway,” he said.

Some supporters of the rollbacks said that while they appreciated having a chance to weigh in on the process, it does not appear to have made an impact. On May 11, 2017, for example, Oregon Farm Bureau officials wrote Zinke to thank him “for taking time out of your evening” to meet with their delegation at the Trump International Hotel and hear ranchers’ objections to the Cascade-Siskiyou expansion.

Sharon Waterman, the bureau’s 1st vice president, said in an interview that while she was glad her group had “a chance encounter” with Zinke at the hotel, she was “very disappointed” the monument’s boundaries remain unchanged.

“It doesn’t seem like what we have done has made an impact, but I don’t know why,” she said. “It’s really sad that they continue this expansion, because it’s really important that [timberlands] stay in production.”

And while critics questioned why Interior officials intended to withhold so much material from public view, legal experts said they can probably justify it under the exemption covering internal executive branch communications.

“It’s almost constitutively vague as to what is deliberative and exempted,” said Columbia Law School professor David Pozen, referring to FOIA Exemption 5. “It was meant to ensure open and frank deliberation before a decision is taken.”

But he added if Interior officials were using the provision to withhold documentation on how it decided to weaken certain protections, that “would be substantially away from the heartland” of the exemption.

“The deliberative privilege wasn’t meant to relieve the executive branch of the burden of explaining and justifying its decisions,” he said.

Pozen and other experts said it was unlikely the redacted portions of the documents could be used as ammunition for lawsuits now challenging Trump’s move to shrink the two Utah monuments.

John Leshy, who served as Interior solicitor during the Clinton administration, said that because the president initiated this review by issuing an executive order last year, administration officials could assert the redacted sections are privileged.

“It’s not at all clear a court would admit this material in evidence in litigation challenging Trump’s actions,” he said, “because the rules about reviewing presidential actions, in general, are fuzzy.”