West Virginia Rivers Coalition lost a leader March 29; and I lost a mentor and special friend. I met Don Garvin when I first started lobbying at the statehouse in the early 2000s; and then got to know him better when I served on the board of directors of WV Rivers. When I took on the executive director position, I spent my first day on the job with Don. He schooled me on the Clean Water Act.

From our first encounters, it was clear that Don was force. Whenever he was in a room, you 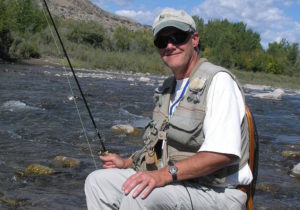 could usually count on a lively debate punctuated with laughter. He got everyone thinking; he challenged everyone to see the heart of the matter. On the WV Rivers board, however debate unfolded, there was a sense that, indeed, he was our heart and soul.

I thought about this when I saw him on his last day. He lay sleeping, unaware of me in his final moments on earth. But I was aware of all he had given to our movement, and to me. It felt like he deserved to rest, he had earned it. Hours later, he was gone, and everyone who knew him feels the loss of someone whose commitment to truth and justice never wavered.

Don’s contributions spanned many years, through many circles, but at the center seemed to be his love for water, and people. He was a founding board member of WV Rivers. He also served decades on the board of WV Highlands Conservancy. Beginning in 2001 until his retirement in 2015, Don was the legislative coordinator and lead lobbyist for the West Virginia Environmental Council. He also served three years as a member of the WVEC lobby team and two terms as president. He was a long-time member of Trout Unlimited, having served as secretary and newsletter editor of the Mountaineer Chapter from 1983 until 1998, and as chapter president from 1998 to 2003.

In 1999, he was retained by Trout Unlimited to edit and write major portions of the national organization’s “Advocacy Manual,” which continues to be used as TU’s primary guidebook on interacting with federal and state regulatory agencies.

As a river advocate, Don knew what we were up against. For 16 years, he was vice president and field manager of Braxton Oil and Gas Corp., in West Virginia. Don knew all sides. He knew rivers and he knew the struggle to keep them clean and safe.

He remained deeply convicted about WV Rivers sticking to our core mission. When things got overwhelming for me, he would bring me back to why we were formed. He would talk about the headwaters; he knew how fragile and important they are. He would say, and his life demonstrated, that the headwaters were worth devoting your life to protect. He did.

In the spirit of humor that marked our friendship, I acknowledge that Don could sometimes get under people’s skin. To say it bluntly, Don sometimes annoyed friend and foe alike. He could be unforgiving in his tenacity. And yet, these same people wanted to be around him. Because you knew, his heart was true. And he was as quick to laughter and story-telling as he was to getting worked up about policies and the undeniable fact that the deck is usually stacked against us, against justice and fairness, against truth.

On my last visit with him, the last in which he was alert and himself, however frail, I was with Evan Hansen of Downstream Strategies. We had come from a meeting with DEP. We were discouraged. We had no idea how we were going to deal with the prospect of compromise. We said, “We need to see Don!” We told him what had been presented to handle streams impaired by coal mining; it wasn’t a good idea. I was so weary, feeling like we always have to compromise, because the coal industry, with all its money, was always pulling the strings.

“But what if we know we aren’t going to win,” I asked. And he just said, “You have to say no if you know it’s wrong. Period.” He was just really clear on it. It was exactly what I needed.

Don believed in WV Rivers. He poured a lot of his life into it. He really wanted to see it succeed. And was happy to see how we grew from an idea so many years ago, to what we are today. To Don the realist, it wasn’t about the idea that we would win every battle, but that we were in every battle. Every battle. Show up. Be bold. Speak truth to power.

Above all, Don was a dear friend. He was one of the few people on the planet I didn’t have to explain things to. I didn’t have to outline the minutia of an entire policy. He understood everything about it, and the politics all around it. Don knew right from wrong. And he always encouraged the fight for what was right. He wasn’t naive about the challenges. He just always knew what was the right thing to do.

Don was generous, too. He donated more than anyone to the WV Rivers’ Science Fund. After his retirement, there were battles we fought that Don funded almost single handedly.

A mutual friend reminded me of another thing that Don taught us, and taught me: People make mistakes. People are not perfect. They can let you down sometimes. People, though, are not judged by their mistakes, or their foibles. But by what they give, what they believe, what they share, what they fight for. How much they laugh. How much they are devoted to what they love.

West Virginia is a better place because of Don Garvin. Our rivers and streams stand a better chance because of him. And I’m so grateful to call him a friend. I’ll miss him.