Bicameral bill in the works to tackle parks backlog 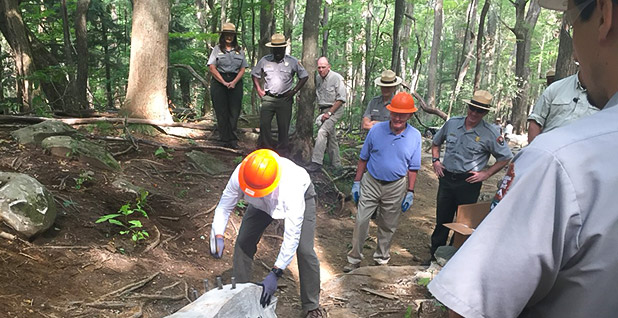 Led by Sen. Lamar Alexander of Tennessee, the group of GOP lawmakers Monday embraced one aspect of the Interior Department’s fiscal 2019 budget request — the call for creation of an $18 billion Interior Maintenance Fund paid for by mineral revenues generated on federal lands.

Alexander yesterday said the bill would likely dedicate $7 billion to $10 billion over 10 years to the NPS backlog.

“I think it’s a good idea; I’ve talked to several Democrats and Republicans about it, and we’re developing it,” he told E&E News.

“This is an issue Congress has been focused on for many years, and working with Interior Secretary Ryan Zinke, we will introduce bipartisan legislation in the House of Representatives and the Senate in the coming weeks to help restore and rebuild our national parks for the next generation of visitors,” the lawmakers said.

While the effort addresses part of the administration’s request for the public lands maintenance fund, it’s silent on the budget’s call to also address repairs at Bureau of Indian Education-funded schools and national wildlife refuges.

Senate Energy and Natural Resources Chairwoman Lisa Murkowski (R-Alaska) yesterday described the inclusion of national wildlife refuges and BIE schools as an expansion and noted that she had a brief conversation with Zinke about it at an event where they both spoke.

“Obviously we want to figure out more about how that’s structured and basically how that whole infrastructure would work,” she told E&E News.

While the budget request says the department plans to dedicate 50 percent of additional and unallocated energy revenues that are over fiscal 2018 budget projections, Murkowski said she still has questions about whether those funds are spoken for.

“The problem that we’ve got is you’ve got a lot of other calls on that money, so how many times has it been spent over?” she said. “We’ve got to find that out.”

The Interior Department did not respond to a request for comment, but Daines, who leads the Energy and Natural Resources Subcommittee on National Parks and is close to Zinke, said yesterday that the Alexander bill won’t be the final word on the subject.

He said other options might also rely on natural resource development to raise revenues that “we could direct … to help knock off a chunk of our backlog on maintenance.”

However, Daines indicated that the NPS backlog will be the initial legislative priority.

“I’d start with the national parks, focus there first, but obviously the list is virtually endless,” he said.

This article appeared in E&E Daily, available by subscription.