Methane is a potent greenhouse gas and toxic air pollutant. According to the Environmental Protection Agency (EPA), the largest sources in the United States are oil and gas systems (32 percent) and enteric fermentation by livestock (27 percent). Yet, the Environmental Defense Fund revealed emissions from oil and gas production to be 60 percent higher than the EPA’s estimate. So, contrary to popular opinion, methane pollution is way more than cow belches!

What are the climate and health risk of methane?

Most often when we talk about the greenhouse gasses that cause climate change, carbon dioxide is at the center of the conversation. Yet, methane is:

It’s clear that cutting methane pollution from the oil and gas industry is the fastest way to slow down global warming and address the climate crisis in the near-term. Limiting global warming is lifesaving for communities that have borne the brunt of climate impacts, like severe flooding and wildfires. Beyond climate change, methane emissions from the oil and gas industry jeopardize the health and safety of workers and communities closest to development. Volatile Organic Compounds, or VOCs, are released alongside methane during operations. VOCs worsen respiratory diseases and increase the risk of cancer and cardiovascular diseases.

Even more, nitrogen oxides produced by gas flaring and engines at natural gas facilities react together in the presence of sunlight with the methane and VOC pollution to form ozone smog. This smog impairs lung function, triggers asthma attacks, and aggravates diseases like bronchitis and emphysema putting children, the elderly, and people with respiratory conditions at the highest risk.

How does methane pollution from oil and gas affect West Virginia? 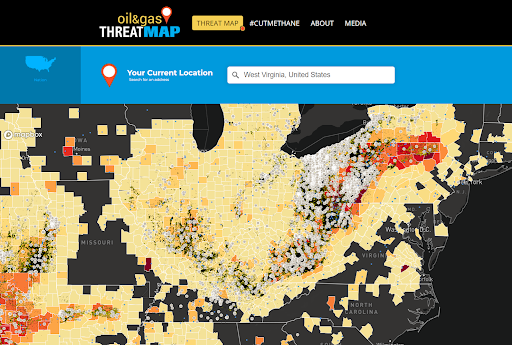 Source: Earthworks and FracTracker – Learn your oil and gas threat at www.oilandgasthreatmap.com.

Low-producing oil and gas wells are unique perpetrators of methane pollution making up eight in ten of all oil and gas wells in the United States. These aging wells produce just 6 percent of our nation’s oil and gas but are responsible for half of all well-site pollution. Appalachia, including West Virginia, is home to the highest number of low-producing wells and experiences the greatest methane pollution from these wells in the entire country. Notably, Kanawha County in West Virginia has 3,303 low-producing wells, the highest in the state. 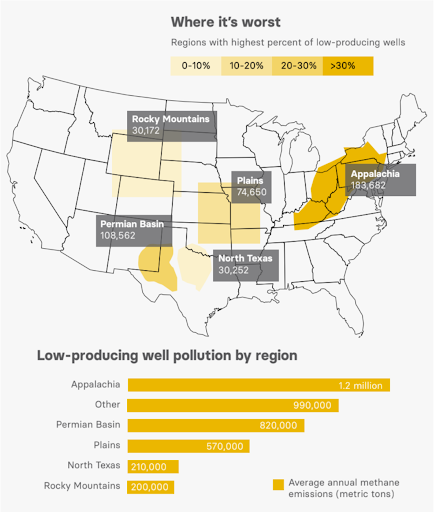 What Can I do?

In November 2022, the EPA proposed an update to a draft rule from 2021 to address pollution from both large and leak-prone small well sites, along with inspections of abandoned wells until they are closed. This proposal will cut methane emissions and other toxic pollution associated with the oil and gas industry. The EPA is accepting public comment on this proposal until February 13th. Tell the EPA to tackle the climate crisis and protect public health by cutting methane emissions in the oil and gas sector today!

Beyond addressing the climate and health impacts of methane pollution, the EPA’s proposal is a common-sense solution for the oil and gas industry to support. Plugging leaks and curbing emissions is highly cost-effective, helping the bottom line of operators. The value of gas wasted each year in the country from leaks at low-producing oil and gas wells is $1.3 billion, enough gas to run 3.6 million homes for a year. The Clean Air Task Force estimates that upon implementation, the rule would create 92,000 jobs nationwide.

Whereas Appalachia and West Virginia are most affected by low-producing and abandoned oil and gas wells, the region stands to see more job creation and better health outcomes with the passage of EPA’s methane rule. Strong methane pollution protections benefit everyone by mitigating health threats felt locally and climate change felt around the world.