Easy Action: Thank members of the Senate who voted against allowing more toxins in our water.

Angie Rosser is sworn in to testify on HB 2382, the WVDEP rules bundle that includes updates to water quality standards.

Last week, the HB 2382, the WVDEP rules bundle that includes updates to West Virginia’s water quality standards reached the end of path through the Legislature. On Monday, the Senate Judiciary Committee debated the rule and heard testimony from expert witnesses, including WV Rivers’ executive director, Angie Rosser. You can listen to Angie’s testimony here, beginning at 4:09 mark.

Under questioning, Angie stressed that the state is already meeting the water quality standards for the toxins that would see their pollution limits weakened if the rule was adopted. She explained that it is a matter of good policy to prioritize the health and safety of West Virginians to reject any changes to water quality standards that exposes us to more toxins.

Following the testimony, Senator Richard Lindsay introduced an amendment that would limit the updates to water quality standards to only the criteria that are more stringent. The amendment failed on a voice vote and the Committee advanced the rule.

On Friday, 3/26 Senate voted along party lines to adopted the rule, without amendments. Thank Senators who voted against allowing more toxins in West Virginia’s water.

So, what’s next? The rule now goes to the Governor’s desk for signature, and the water quality standards revisions will have to be approved by EPA in order to go into effect.

And the work continues. WV Rivers is representing you on WVDEP’s Human Health Criteria Workgroup which meets monthly to consider remaining recommended updates. We will continue to advocate for adoption of all updates that EPA recommends West Virginia needs to strengthen standards to adequately protect human health. WVDEP will enter the next rulemaking process in June 2021.

Thanks Senators for Voting for Clean Water

It’s essential to say “thank you” to the Senators who voted in favor of clean water. Expressing your gratitude to decision-makers who listen to the voice of the people is an important aspect of being a citizen advocate. Let the Senators who prioritized public health and clean water know you appreciate their vote on water quality standards. 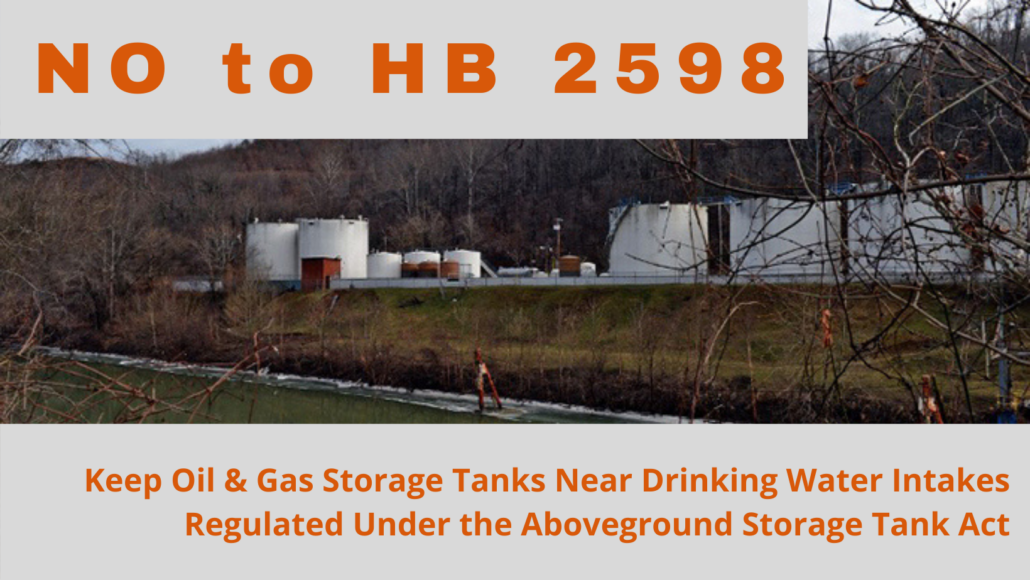 With two weeks left in the legislative session, HB 2598, which would exempt certain oil and gas tanks closest to public drinking water intakes from the Aboveground Storage Tank Act, is still lurking. It passed the House and is sitting with the Senate Judiciary Committee. We know that committee will start considering House bills at an accelerated pace this week.

This week brings “cross-over day”, where bills that don’t make it out of their house of origin by Wednesday will not have a chance of passing and are considered “dead”. We’ve condensed our bill tracking list to those bills that are still active within four policies we’ve prioritized this session. If you are looking for more in depth information on these issues, head over to our water policy webpage for factsheets and previous editions of our weekly water policy news.

Priority: Fully Funding the WVDEP Office of Oil and Gas

Other active bills we’re keeping an eye on that have water quality implications.

Water policy has been a hot issue this session with coverage on the debate appearing in media outlets across the state. We’ve prepared a round-up of stories shining a light on water policy.