Easy Action: Let members of the House of Delegates know you oppose any rule that weakens water quality standards.

On Tuesday, 3/2, the House Judiciary Committee held a robust debate on proposed revisions to West Virginia’s Water Quality Standards. Read coverage of the meeting by the Charleston Gazette-Mail. The proposal, submitted by WVDEP makes changes to an important part of West Virginia’s water quality standards called human health criteria. Human health criteria set limits for the toxins most harmful to human health in our water. WVDEP’s proposal makes changes to the limits for 24 toxins, 13 the proposed updates would weaken human health criteria, opening the door for industrial facilities to discharge more toxins and cancer-causing chemicals into our drinking water supplies. 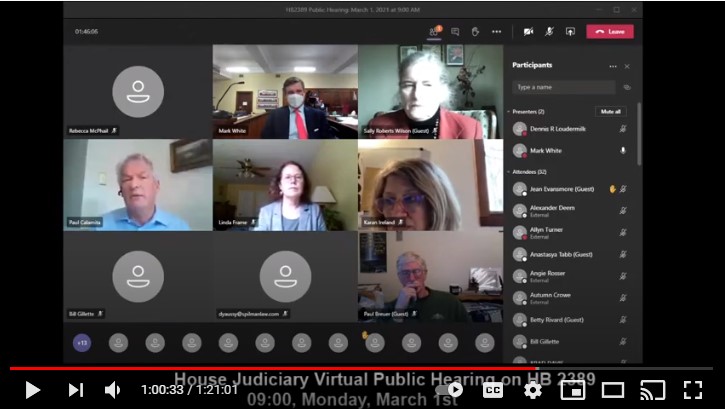 A screenshot of the virtual public hearing on HB 2389. Watch a recording of the hearing.

The rule has been attracting a great deal of public attention and input, including through a virtual public hearing held earlier this week. West Virginia citizens from across the state have voiced loud and clear they do not want more toxins allowed in our water. During the committee meeting, Delegate Chad Lovejoy led questioning of WVDEP about the public input process and implications of the proposed water quality standards revisions on public health. Delegate Lovejoy also offered an amendment to strip out those updates that would make the state’s current standards less stringent.

The amendment failed on a 16-8 vote. Delegates Pushkin, Zukoff, and Lovejoy spoke passionately in closing arguments about the need to protect our water and reject policy that would lead to increased exposure to cancer-causing chemicals.

The rule, without amendment, ultimately passed out of committee on a voice vote and has been bundled together with other WVDEP proposed rules into a single bill, HB 2382, that now is headed to the House floor for a full vote. It’s expected that the rule will be in the amendment stage on the House floor on Monday, 3/8. Now is the time to let your Delegates know you oppose any revision to water quality standards that makes human health criteria less stringent

The WVDEP proposed water quality standards rule has a long and complex history. You can view resources on the rule below:

On Thursday, 3/4, the House Health and Human Resources Committee passed HB 2598, the bill that would exempt certain oil and gas tanks closest to drinking water intakes from the Aboveground Storage Tank (AST) Act on a 18-6 roll call vote. Last week, we shared how HB 2598 ended up in the committee, after a movement in its originating committee to refer it to the House Health and Human Resources Committee failed. Read our fact sheet on HB 2598.

Delegates Barach, Bates, Fleischauer, Griffith, Pushkin, and Walker voted against the bill in the interest of protecting our water. The bill now goes to the House floor for a vote by the full House of Delegates. Contact your Delegates today!

Delegate Pushkin, minority chair of the committee, kicked off questioning of WVDEP. Notably, the WVDEP representative voiced that the agency does not support the bill. Their testimony confirmed that oversight of these tanks would be severely reduced if the bill should pass. WVDEP explained the bill would exempt 887 tanks from the AST Act that are located closest to our public drinking water intakes within zones of critical concern.

Delegate Griffith asked questions about the dangers of the contents of these tanks. WVDEP clarified that only 12% of the tanks to be exempted are reported by the operator as “brine”, and the remaining 78% contain a mix of petroleum product and associated pollutants. Delegate Griffith confirmed these tanks contain pollutants that cause harmful health effects, including cancers.

Delegate Barach’s line of questioning brought to light the chronic failures and neglect of these types of tanks. Of all DEP’s statewide documented releases of contaminants from aboveground tanks in 2019, two-thirds of those releases were from the oil and gas tanks that would be exempted by this bill.

Delegate Fleischauer asked DEP about the degree of oversight that would be lost if this bill passed. It was concluded based on DEP’s past four years of inspection frequency data, that it would likely take DEP 20-40 years to inspect each of the tanks if the bill exempts them from the AST Act.

In closing arguments, Delegates Pushkin, Griffith, Barach and Fleischauer pleaded with the committee to reject the bill. They cited the effectiveness of the AST program to prevent water contamination, the importance of regulating tanks within zones of critical concern, and the severe consequences (like the 2014 water crisis) that can happen if we fail to provide adequate oversight of tanks located near our drinking water intakes.

The bill now heads to the House floor for a full vote in the coming days. It’s important now to do two things: please thank the six delegates who stood up for you and your interest in drinking water protects; and tell your elected delegates to vote NO on the bill when it comes to the floor.

Thank Delegates that Voted in Favor of Strong Water Protections

Thanking members of the Legislature who vote for clean water policies is just as important as sharing your policy positions with them. It lets legislators know that you’re paying attention and it encourages future clean water support. Please take a moment and share your gratitude with Delegates on two recent votes. 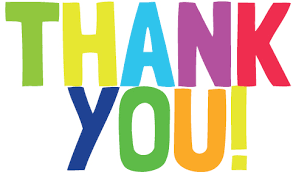 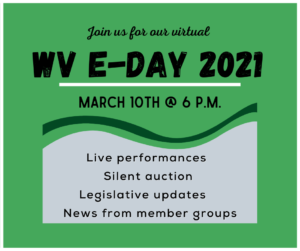 Mark your calendars for the West Virginia Environmental Council’s E-Day on March 10 from 6:00 – 7:30PM. While the event is free, registration is required.

During the live event you’ll earn about environmental policies before the legislature; hear from E-Council members, like WV Rivers; and enjoy live music and an auction of a Charly Hamilton print!

The event is free to the public, but a $10 donation is suggested to support E-Council’s efforts.

Fully Funding the WVDEP Office of Oil and Gas

Other bills we’re keeping an eye on that have water quality implications.