If keeping up with the news on the Mountain Valley Pipeline is making your head spin, you are not alone! 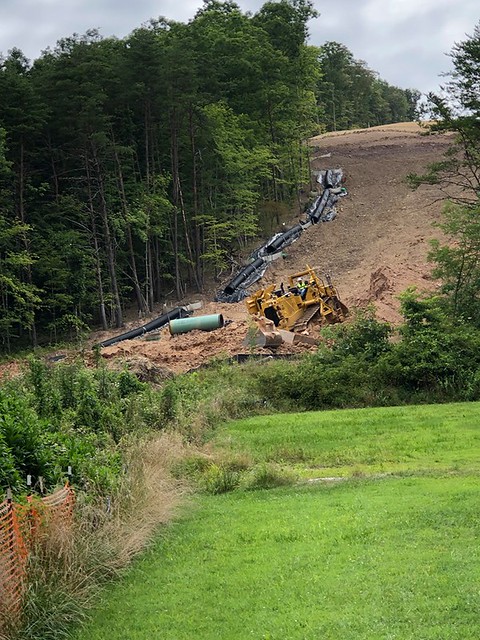 Construction of the Mountain Valley Pipeline.

So far, every other week of 2021 there has been breaking news on the pipeline front. The shift in the administration on the federal level has pipeline companies scrambling. You may have seen that President Biden signed an Executive Order cancelling the Keystone XL. Yesterday, Senator Manchin sent Biden a letter suggesting he re-consider that decision, citing other important energy infrastructure projects such as Mountain Valley Pipeline.

Mountain Valley Pipeline (MVP) has encountered roadblocks as they attempt to resume construction. At the end of 2020, MVP requested an amendment to their FERC certificate in order to bore under 69 streams and wetlands in the first 77 miles of the route to connect to the WB Xpress Pipeline in Braxton County. The Federal Energy Regulatory Commission (FERC) denied that request with a 2-2 split vote. Since that meeting, FERC’s leadership has changed with the inauguration of President Biden. Energy analysts are saying the shift in administrations might not bode well for fossil fuel infrastructure projects.

What’s Next? FERC’s denial of MVP’s request to bore under streams and wetlands sent the company back to the drawing board. Considering their limited options, with their Nationwide 12 permit ensnared in legal issues, MVP announced their intent to apply for an individual permit to cross streams and wetlands and abandon the blanket Nationwide 12 permit. This approach requires them to request site-specific permits from the Army Corps of Engineers, VA DEQ and WV DEP, an approach that WV Rivers and other environmental groups had been saying was necessary from the beginning.

In the Consent Order, that is now open for public comment, the WVDEP cited 29 separate violations from February 2019 to September 2020 detailing failing erosion control measures that impacted the water quality in rivers and streams. These impacts occurred during the time that MVP was prohibited from crossing streams. If they can’t protect water quality when they are not working directly in streams, that doesn’t instill a lot of confidence that they will comply with water quality standards during in-stream construction.

Stay tuned to WV Rivers, we’ll be sharing an action alert to submit your comments to WVDEP on MVP’s $300,000 fine. And we’ll keep you informed as MVP moves through the WVDEP water quality certification process.