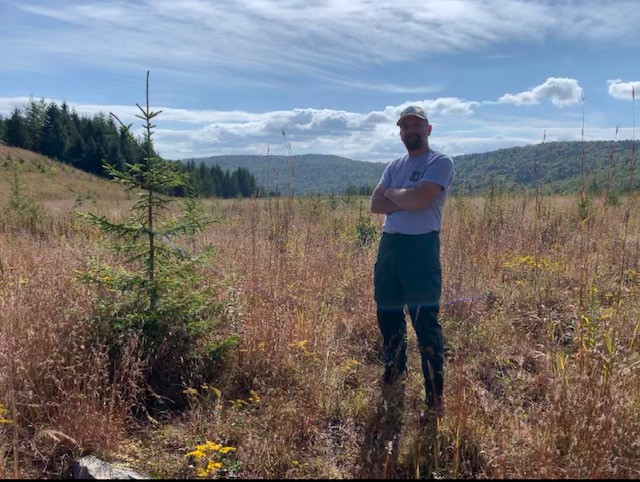 Greenbrier Ranger District Biologist Shane Jones stands next to the product of the first iteration of the Red Spruce Restoration Project.

This month, WV Rivers staff and public lands advocates celebrated the Fall Equinox by learning about the Red Spruce Restoration Project on the Mower Tract Project in the Monongahela National Forest.

The Mower Tract is a 40,000 acre parcel of land that was once owned by a local lumber company. The company contour mined about 2,500 acres of this once old growth forest. After exhausting the mineral resources the company sold the land to the US Forest Service.

During this exchange, Norwegian Spruce Forest took over the hillsides. Overtime the Forest Service observed that the once diverse ecosystem had not returned or regenerated, and the non-native spruce were struggling to remain healthy.

Staff biologist, Shane Jones and District Chief Ranger Jack Tribble went back to the drawing board. After failed attempts to kick-start a healthy forest, they began looking for the right partners to join the restoration project. Eventually Green Forest Works emerged. The alliance of forest scientists, engineers, advocates, and funders collaborated to develop the current Red Spruce Restoration Project on the Mower Tract.

The Forest Service has seen a 90% success rate in Red Spruce survival from the project, why does it work? Ranger Tribble said, “We are really just trying to set up the environment and get out of the way and let nature take over.”

“A lot of rare critters depend on the Red Spruce. From Brook Trout, to the Cheat Mountain salamander, the Northern flying squirrel and more. And so, when you think about climate change and forest resiliency, this is it. The best place to do Red Spruce restoration, this is it,” stated Jones.

“The last major project that we have to complete are the four loop trails throughout the area,” said Ranger Tribble.

Biologist Shane Jones shared, “I am not going to see the full impacts of this forest, but it feels good to be a part of such a project.”