Watoga State Park: You Can’t Get There From Here 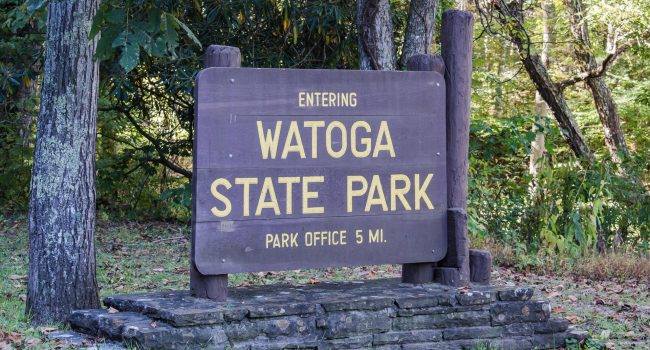 The first time that I heard the words ‘Watoga State Park’ I was sitting on the porch of Harper’s General Store in Mouth of Seneca, West Virginia; now called Seneca Rocks. I was talking to Buck Harper, the proprietor of this historic store that still had a single hand-crank gasoline pump out front. In the colder months, the store served as a Saturday-night gathering spot where local gents played cards on the butchers’ block while a cheery fire burned in an old pot-bellied stove.

As a regular rock climber at Seneca Rocks, I got to know Buck as a man of great wit, whose musings were greatly enjoyed by the climbing community. His ‘country boy’ affectation belied the fact that he was a graduate of Davis & Elkins College and one of the sharpest and funniest men I have ever known.

About that time a big RV pulled in that was towing a jeep in which there were two bicycles. On top of the RV, there was an aluminum canoe strapped to the railing, and a dirt bike mounted on the front bumper.

A gentleman from New York stepped out of the RV and Buck, not saying a word, slowly made his way around the vehicle, examining all of the various means of transportation that was attached to it. After circling the rig, he looked at the owner and said, “I do not know where you are headed sir, but you sure do plan to get there.”

The New Yorker chuckled and asked Buck how to get to Watoga State Park. In his usual style, Buck put his hand to his chin in deep thought for a few moments and said, “I don’t think that you can get there from here.”

Well, Buck went on to give the man directions to our park, but there were times in Watoga’s history when Buck’s comical remark was reasonably accurate. Today’s access to the park was a result of continual improvement initiated by the CCC, but in Watoga’s early years it was mainly restricted to a route that took visitors through Huntersville and into the park by way of Beaver Creek Road.

Many, if not most, of today’s visitors to Watoga State Park, enter the park through the village of Seebert where a modern bridge offers a safe and convenient crossing of the Greenbrier River. Such was not the case for much of Watoga’s 82-year history.

Before the first bridge was constructed in Seebert in 1965, this community, like many in the Greenbrier River corridor, used natural fords for crossings. Some enterprising folks offered “boats for hire” and ferry services, which unlike the natural fords, were less dependent on a narrow range of water levels.

To get the lowdown on the Seebert area, I needed only to stop at the home of a neighbor, Curtis and Irene Pyles. Curtis is a lifelong resident of Seebert; he grew up on the family farm located just across the river. Curtis has an encyclopedic knowledge of Seebert and the area.

Curtis and his lovely wife Irene sat down with me recently to share many delightful stories about the relationship between the village of Seebert and the Greenbrier River.

He was quick to point out that the Seebert you see today was nothing like the Seebert of the railroad days.

A visitor to Seebert back then would see trains stopping at the depot, located near the present day Horner’s Corner. There was a post office, several stores, a gas station, and a Presbyterian and Methodist Church. As well, the Pleasant Green Church can still be seen on Seebert Lane just outside of town.

Before there were any over-water bridges, Curtis, like his siblings before him, would pole a boat across the river from their farm to a spot just above where Stamping Creek joins the Greenbrier. He would tie up the boat there and walk the railroad tracks down to the Seebert Depot, where the local children waited for the school bus to take them to Hillsboro. Curtis remembers fondly that there was a coal burning stove in the depot; a welcoming warmth on cold winter mornings. 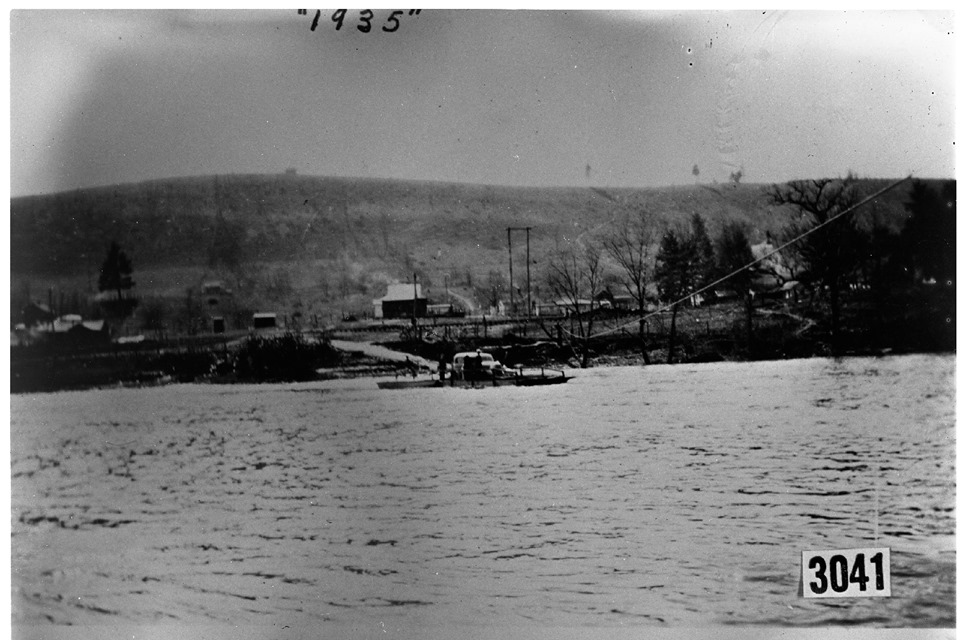 Seebert had several low-water fords over the years, but a ferry came to Seebert in the early 1930s. Fred Barton, a veteran of World War I, was employed as a ferryman for the CCC Camp Seebert, located near Cabin 1 in Watoga State Park.

The ferry service came to a tragic end when Barton attempted a crossing with 6 or 7 passengers on board on May 7, 1935; the river that morning was 7 feet above flood stage. The rope that tethered the ferry to the cable broke, causing the boat to overturn dumping the passengers and Captain Barton into the swollen and fast-moving Greenbrier River. Ironically, everybody made it to shore but Barton, who was unable to swim.

A low-water bridge, remembered fondly by many park visitors and locals, was built in 1948. The concrete structure spanned the river a couple of hundred yards downstream from the existing bridge.

Vehicles crossing this low-water bridge would drive up on the island for a short way where a shorter section of similar construction bridge traversed the lagoon and onto the park entrance road. 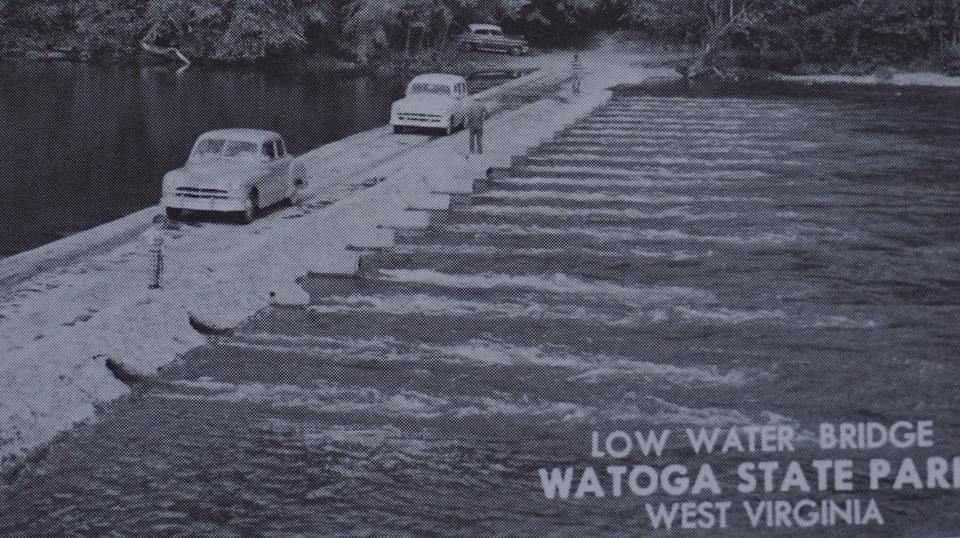 The state built the first modern bridge in 1965; Curtis explained that this structure was suspended on concrete piers and decked with treated two by fours, laid horizontally on the 2-inch side across the width of the bridge. The bridge was washed away by the great flood of 1985, also known as The Killer Flood.

At this point, Seebert found itself once again cut off from the other side of the river. Residents that lived over there had to drive through the park to gain access to Beaver Creek Road, and then on to other destinations.

For a brief period park visitors had to revert to using the same route used during the CCC Camp Watoga days, that being Beaver Creek Road from Huntersville.

In a matter of weeks though, bulldozers and heavy equipment arrived in Seebert to build a temporary ford across the Greenbrier just downstream from the tattered remnants of the old low- water bridge. This crossing was used until the new bridge was completed in November of 1986.

And now, barring high water the likes of which this state saw in November of 1985, getting to Watoga State Park is just a scenic drive away.