This data was provided to state and federal regulators by the facilities themselves. The notice of intent letters were also sent to the West Virginia Department of Environmental Protection and the U.S. Environmental Protection Agency. If in 60 days the companies are not in compliance with the CWA and SMCRA, the coalition will seek relief in federal court to hold the companies accountable for their violations and to clean up the streams that receive the pollution.

The companies and their facilities that are subject to the letters are as follows: 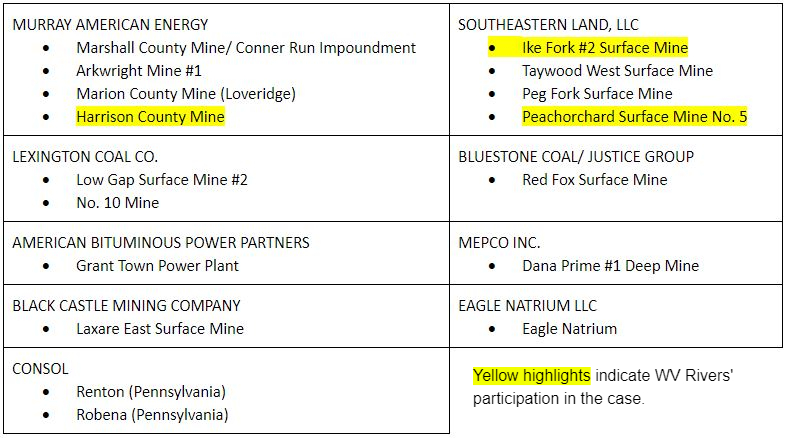 “This chronic and widespread problem of unfettered illegal activity has already stacked up too much harm to our waters,” said Angie Rosser, Executive Director for the West Virginia Rivers Coalition. “We simply can’t stand by and watch coal companies get a free pass while our streams, and the residents that depend on them, pay the price. Something has to change.”

“Citizen suits like these are necessary to enforce the law and make companies internalize the costs of non-compliance that they inflict on their neighbors and the environment,” said Jim Hecker, Environmental Enforcement Director of Public Justice.

“After unsuccessfully objecting to the original permitting of these and similar mines, neighbors and citizens groups are left to seek recourse through legal remedies to achieve necessary clean-up of polluting discharges,” said Cindy Rank of the West Virginia Highlands Conservancy. “We are saddened by the necessity, but grateful for the ability to seek accountability through the citizen suit provisions of the federal Clean Water and Surface Mining Control Acts and for attorneys who are willing to assist us.”

“Illegal pollution harms not only the rivers and streams that receive the pollution, but also the communities living nearby,” said Erin Savage, Central Appalachian Program Manager for Appalachian Voices. “A clean, healthy environment is an integral part of diversifying West Virginia’s economy beyond a reliance on fossil fuel extraction.”

The groups sending today’s letters are represented by attorneys with Appalachian Mountain Advocates and Public Justice.