Harpers Ferry, WV — At a July 27 event honoring U.S. Senator Shelley Moore Capito, the towns of Bolivar and Harpers Ferry presented a proclamation of thanks to the senator for her leadership and support of Harpers Ferry National Historical Park and surrounding communities. The event was hosted by the Harpers Ferry Merchants Association, a group of more than a hundred businesses that rely on the tourism economy generated by the Park. 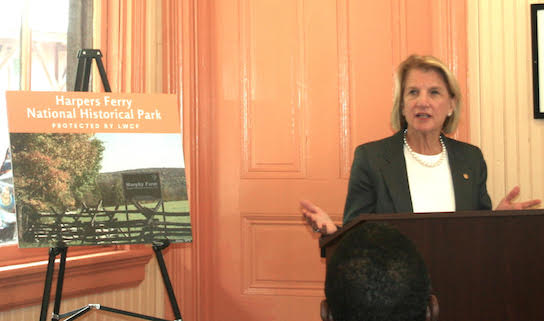 As a U.S. Representative, Mrs. Capito helped usher through a bill signed by then-President Bush in 2004 to expand the boundaries of the Park. She then worked with the WV Congressional delegation to secure $7.9 million in two grants from the Land and Water Conservation Fund (LWCF) to conserve lands inside the expanded boundary. Senator Capito is now a co-sponsor of a bill to permanently reauthorize LWCF; she said Friday she wants to see mandatory funding for the program.

Event speakers also thanked Senator Capito for her assistance after the devastating fire that destroyed businesses in Harpers Ferry three years ago, and for assistance in gaining funds for a new drinking water plant for the towns.

The Land and Water Conservation Fund, or LWCF, is a 53-year-old program that allocates some of the royalties from offshore oil and gas leases to fund recreation access and improvements on both federal lands and state and local parks and forests. The acquisitions for Harpers Ferry include Murphy Farm, part of the Battle of Harpers Ferry and, later, the setting for an historical walk by participants of the second meeting of the Niagara Movement — the precursor to the founding of the NAACP. In Jefferson County, LWCF also has funded projects at Sam Michaels, Hite Road, and Evitts Run parks.

“If the other 99 Senators could be in the room with me here today, I think they could see why this is so absolutely, critically important,” said Senator Capito. “Not just so for preserving the land, not just for preserving clean and safe water, but to the business community as well — to the residents; to the quality of life, to the ability to attract tourists.”