Sportswoman Cassie Moats is a West Virginia native, owner of a campground in Walkersville, and a big-game hunting guide. 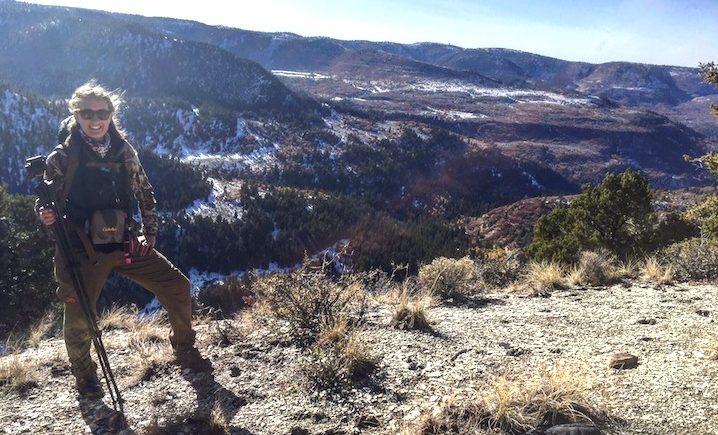 As a big game hunting guide, I’ve traipsed the backwoods of some our country’s most beautiful and isolated places. These roadless areas and forests are my playground. I go to these open spaces to hunt, fish, unwind, and to simply connect to my surroundings. No matter where I go, I’m always happy to come home to West Virginia, where I was born, own a business, and still love to hunt, fish, and adventure. Some of my favorite places to get away from human development are titled as “roadless areas.” I’m concerned about moves in Congress to open them up for development.

You may have never heard of a “roadless area,” but some of the best-known places in the Monongahela, George Washington, and Jefferson national forests have that designation. Places like Seneca Creek, Roaring Plains, Canaan Loop, Tea Creek, North Mountain in The Mon, and Big Schloss in the “GW” and Peters Mountain in the Jefferson (one of two places in our state crossed by the Appalachian Trail). All told, it amounts to 182,000 acres in West Virginia — 162,000 of them in The Mon.

These areas were designated in 2001 under the Forest Service’s Roadless Rule to limit increasing development of remote public lands. As an avid outdoorswoman and outfitter, I can tell you these places are a big reason outdoor enthusiasts come to our state to spend their tourism dollars. They don’t have the same restrictions of wilderness; they simply offer paradise for backcountry hunters, anglers, paddlers, bikers and hikers who want to get away from roads and experience the best of nature.

So what’s Congress trying to do? Every attempt to pass a budget has been laden with controversial “riders” that have nothing to do with the budget. Some of those riders come from Senators and Representatives who want to open up roadless areas for logging and mining roads, starting with Alaska and making their way, just maybe, here to West Virginia. We got through the 2018 budget without the riders, but now Congress is working on the 2019 budget. Will this bad idea rear its head again?

As a sportswoman, I try to understand the ecological diversity, connections, and the natural process of my environment. The relationship between nature and people is important, and I don’t think it’s wise to dabble with every acre or resource available to humankind. Wildlife habitat and migrating corridors across the U.S. have been severely fragmented. I believe that we need to leave a large tracts of land intact and free of roads or human disturbance. Roadless areas help filter clean drinking water and provide a unique environment for a number of forest interior species. Old trees and snags have been naturally selected to serve as nesting cavities for birds and dens for mammals.

As a woman, I embrace the challenge of getting away from roads to hunt, fish, and hike. I’ve been molded and mended by these roadless areas. These places have helped me to grow into an independent Mountaineer who fends for herself and runs a business. They are also a big part of what keeps me here. I’ve traveled across the country, I’ve been north and I’ve been south. West Virginia is one of the most beautiful states in the country; we should cherish it and protect our forests.

So far, none of West Virginia’s Congressional delegation has said they want to see these areas opened up for logging, mining, or drilling roads. But none have publicly stated they would resist legislation that would open the backdoor to developing them, either. I hope they will send a strong signal that roadless areas are off the table when it comes to development — both the ones here that draw tourism dollars and the ones across the U.S. that we Mountaineers enjoy.

Sportswoman Cassie Moats is a West Virginia native, owner of a campground in Walkersville, and a big-game hunting guide.

WV Rivers News: Water Quality Standards Up for Review, Spring Events and Wo...