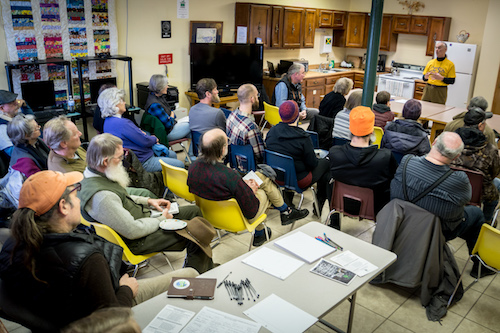 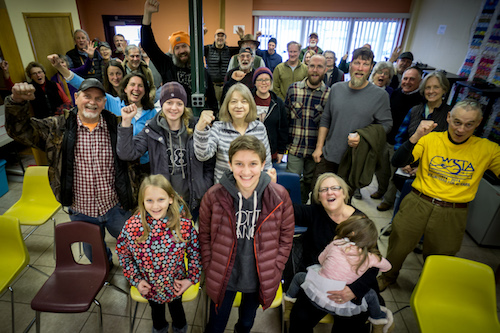 Over 40 people bundled into the tiny Hillsboro, WV library in a snowstorm February 17 to discuss Governor Justice’s stripped down proposal to allow commercial logging in Watoga State Park. The bill, SB 270, is being considered by the WV Senate Natural Resource Committee.

They heard and shared stories about what Watoga means to their community; about their love and connection to this park, and about their overwhelming desire to protect this special area from commercial logging. In a show of solidarity, they were joined by people from across West Virginia.

Lione Gray, a Hillsboro resident, took exception to the Justice administration’s notion that vast areas of the park were rarely visited, and that logging the mature forest would make them more attractive to visitors. “With over 40 miles of hiking trails, Watoga is a favorite destination for hikers from many areas, both in and out of state — accounting for a high number of visitors to both the park and Pocahontas County,” Gray wrote in a letter to Senate Natural Resources Committee. “Our park visitors drive the economic engine of the county and account for a high percentage of our revenue.”

Ken Springer, a long-time trail volunteer at Watoga says the issue isn’t about being anti-logging. “What I am appealing to now has far more to do with preserving a relatively small area of forest for reasons that have nothing to do with money, but everything to do with respect for history and the wisdom to keep some areas of great beauty sacrosanct just because it is the right thing to do.”

Before the meeting at the library, many had gathered for a wintery hike in the forest that would be logged should the bill become law.

People from across West Virginia and across the political spectrum have voiced their opposition to logging in state parks. Now that the focus of a bill in the WV Senate has put Watoga in its crosshairs, people are standing with Pocahontas County and with Watoga State Park.

The committee meets on Monday, February 19. You can take action to “kill the bill” by sending a letter now!