About a hundred Eastern Panhandle residents came out January 9 for a public hearing hosted by WV Department of Environmental Protection on the water quality permit application by Mountaineer Gas for the Eastern Panhandle Pipeline Expansion. The purpose of the hearing was to allow the public to comment on the draft permit that will cover the discharge of stormwater during construction activities.

Benjamin joined nearly three dozen residents and community leaders in asking WVDEP to deny the application. “This current permit must be denied by the WV DEP due to its many deficiencies,” said Benjamin. “This permit application  is missing critical safety contingency plans and other important information required by WVDEP and thus fails to adequately comply with the terms of the permit.”

The deficiencies WV Rivers cited in the permit include:

Mountaineer Gas Company’s application for the EP Pipeline does not meet the requirements for the WVDEP Oil & Gas Construction Stormwater General Permit. 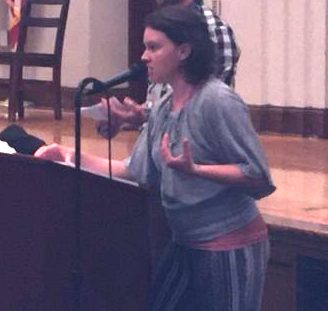 Some commenters offered heart wrenching stories, like a farmer whose family land is being taken by eminent domain. Among the property rights abuses her family has been subjected to, she reported that the family is liable for property taxes on land they cannot use.