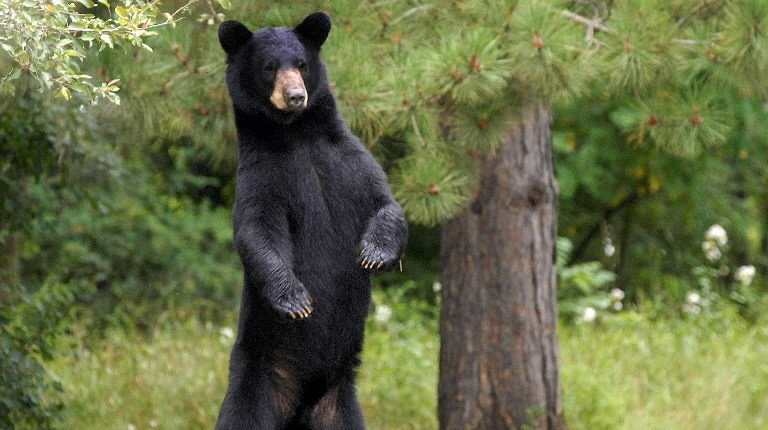 The black bear, the pond, an me

Over a period of several years, every time I told the story, that bear got a little bit bigger. It wasn’t really my intention to exaggerate, but the moment and its power on me just grew larger with time.

As for the exact location of the incident, I have been sworn to secrecy. When I was first shown it, after some time bushwhacking in the Potomac Highlands of the Monongahela National Forest, my guide said bluntly, “If I ever read about this spot in one of your books, I’ll consider it a violation of trust.”

It’s a glade nearly a quarter mile wide with a shallow pond in the center. It seems to appear out of nowhere. It’s more than a feeling of stepping into another ecosystem or another mountain range, it’s more like stepping onto another planet.

I went there alone once on a detour on the way back to the Eastern Panhandle. Each time it takes me a little while find my way. The departure point is not marked. And there is no defined trail. Even my guide, when leading the way that first time — and he’d been there dozens and dozens of times — had to carefully pick his way among landmarks, looking at trees, pausing to get his bearings, moving this way and that. For me alone it required a lot of zigging and zagging and coincidence and good fortune to find my way.

I arrived with enough light left in the day to drink it all in, sit a spell, and scamper back to the road.

I had walked about a quarter of the way around the pond looking at flowers and plants I couldn’t identify, listening to the quiet. Then I saw the bear watching me.

And I stopped. And I thought, “Wow that’s big!” Then I watched him in — in my mind it is always been a him —as he began to circle the pond in the same clockwise path as mine. I figured it was looking for its own path, so he could go about his evening a little perturbed that I had interrupted his time at the pond. But he just kept coming.

I started walking to keep my distance, to make sure there was plenty of pond between me and the bear. I kept moving, and he kept coming.

At first I thought it was kind of cool. Then I admit to being a concerned. He wasn’t acting menacing, only curious. And somewhat determined.

I tried not to quicken my pace. I didn’t want to break out into a trot. I just wanted to make it back to my path without sacrificing my pride. Or worse.  I didn’t want to show that I was becoming unnerved. We kept circling the pond.

My pace quickened, but the bear’s did not. He lumbered along. As I was about to go into full panic I came upon the the faint path I’d used to enter the clearing, and moved to it. As I stepped onto the path, I turned to see how close this fella had gotten. He had stopped at the same spot where I’d seen him first, as if watching and bidding me adieu.

I stared long enough absorb the moment, and I’m headed down the path as fast as I could walk without going into a run, every now and then looking over my shoulder to see if I was being followed. I wasn’t.

Eventually I broke into run, zagging and zigging my way until I could see light through the trees — telling me that I was coming to the road. I emerged onto the road about 100 yards from my car.

About every 10 yards or so I laughed so hard I had to stop walking. Then I sat in the car and watched the moon rise while my heart slowed, feeling thankful for the day.

It was a few years before I made it back there. I’m not saying I avoided the place, but I admit to giving it a respectable distance.

Sometimes when I think of that encounter, I try to ascribe meaning to it. Was the bear merely thinking of me as another careless hiker who would leave food in my tracks? Was some higher power bringing us together for a brief moment to remind us of what we share? Or that bear was just demonstrating that the place was his, not mine?

Or maybe he was saying, “If I ever read about this place in one of your books, I’ll consider it a violation of trust.”

So the place will remain a secret. But I don’t think my guide or the bear will begrudge me telling the story.

As I write this, the sun is setting on a magical September evening. After an odd heat spell, the air has turned crisp and clean. The eastern sky and land are aglow in sunset while a half-moon is rising in the west.

It is National Public Lands Day. Today all across the country, people got outside to hike, plant trees, fish, celebrate, or volunteer to give back to these lands and our county that has conserved them.

It’s also a fitting day to remember the magic. To think about and appreciate our public lands — some magnificent, some humble. About how they nurture us, about our responsibility to steward and nurture them, and about how we need to do everything in our power, every day, to keep our public lands in public hands forever.